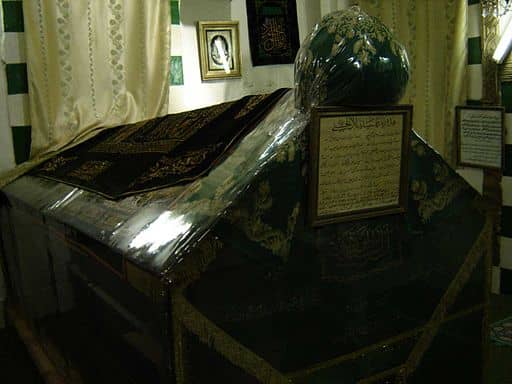 Bilal was a black slave belonging to 'Umayyah ibn Khalaf. He was tall, thin and slightly hump-backed. Thick grayish hair crowned his head. He moved about silently - speaking only in reply. He was born to two slave parents, making him a slave. He used to travel to ash-Sham for 'Umayyah's trading caravan, braving the bitter cold of winter and the extreme heat of summer. His only recompense was a handful of dates each day that he ate to strengthen his body. At his master's house he would serve the guests while going hungry. He was overworked and mistreated as were 'Umayyah's other slaves.

Bilal would often hear about Muhammad sallallahu 'alayhi wa sallam, and Islam, through the alarming dicussions between his master and guests. Soon he felt drawn to this religion. He would listen to Abu Bakr calling to Islam, and slowly his heart was filled with 'iman. He went with Abu Bakr to the Prophet sallallahu 'alayhi wa sallam and declared his submission to Islam. This was a daring move from a slave who belonged to a staunch enemy of Muhammad. He was the seventh person to accept Islam. Abu Bakr and others of the same tribal status, were spared from harm by the Quraysh. However, the wrath of the disbelievers fell upon the Muslims who had no tribe to defend them. 'Umayyah ibn Khalaf used to force Bilal to go outside during the hottest part of the day wearing a suit of armour where he would then be thrown face down in the sand and leave him to bake in the sun. He would not return except to turn him on his back. He owuld have a gigantic rock placed on his chest and then say, "You will stay here until you die or deny Muhammad and worship al-Lat and al-'Uzzah." Bilal used to endure this only by saying, "One, One." Abu Bakr passed by one day while they were torturing him. He said to 'Umayyah, "Have you no fear of Allah that you treat this poor man like this?" 'Umayyah replied, "You are the one who corrupted him, so you save him from his plight!" Abu Bakr replied, "Then sell him to me, you can state your price." 'Umayyah who was not to let a good deal pass by, sold Bilal, he added, "I would have sold him to you even if you had offered me but an ounce of gold." Abu Bakr answered, "I would have bought him even if you asked a hundred ounces." Abu Bakr and Bilal went to the Prophet sallallahu 'alayhi wa sallam with the good news. There he announed, "I am setting Bilal free, O Messenger of Allah." This greatly pleased the Prophet sallallahu 'alayhi wa sallam not to mention Bilal himself.

When the Muslims were settled in Madinah, Islam became firmly established - salah, zak'at and fasting were instituted. In the beginning, Muslims gathered for salah at the appointed times without being summoned. Later the Prophet sallallahu 'alayhi wa sallam thought about using a trunpet like that the Jews used to summon to salah. He disliked the idea and ordered a clapper to be made to be beaten at salah times.

"It is a true vision insha'Allah," said the Prophet sallallahu 'alayhi wa sallam adding, "Go and teach it to Bilal for he has a more beautiful and far reaching voice." For the first time Madinah resonated with the adhan as Bilal was saying it. It was only fitting that the one who uttered the word of Tawhid under the harshest of torture should utter it during the adhan. When 'Umar heard the adhan he rushed to the Prophet and said, "By the One Who has sent you with the Truth I had the same dream about it!" "Revelation has already preceded you," replied the Prophet sallallahu 'alayhi wa sallam.

Badr was a day etched in Bilal's memory. Quraysh was inflicted a heavy defeat and many were taken prisoner. Among them was 'Umayyah. When Bilal saw him, the memories of what he, and other Muslims, has endured in Makkah came rushing back to him. He exclaimed, "The arch-enemy of Allah - 'Umayyah ibn Khalaf! May I not live if he lives!" Now 'Umayyah was 'Abdur-Rahman ibn Awf's prisoner, and this fact dissuaded Bilal from attacking 'Umayyah himself. But, because Bilal kept crying these words, one of the Sahabah killed Umayyah with his sword.

The Prophet sallallahu 'alayhi wa sallam entered the conquest of Makkah not as a proud conquerer, but as a humble servant of Allah. He bowed his so low that it almost touched his mount. After he ordered that all idols be destroyed, he stood at the door of the Ka'bah and said, "There is no god but Allah alone. He has no associate ... O Quraysh, Allah has taken you from the haughtiness of jahiliyyah and its veneration of ancestors. Man springs from Adam and Adam sprang from dust," then he recited verses from the Qur'an until he said, "Verily the most noble of you in Allah's sight is the most pious." [Al-Qur'an 49:13] He ordered Bilal to make the adhan on the rooftop of the Kab'ah. Hearing his voice, a disbeliever exclaimed, "Look at this black man!" His friend replied, "When Allah hates someone he turns him to the worst." Histroy however attests that Bilal occupied a distinguised position among the Prophet's Companions. 'Umar would often say, "Abu Bakr is our master and he freed our master." Meaning Bilal. But Bilal would say, "I am only a man who used to be a slave."

Bilal asked the Khalifah, Abu Bakr, to allow him to go to ash-Sham for jihad, he spent the rest of his life there. He made adhan only twice since then. The first was when 'Umar came to ash-Sham. The second was when he visited the tomb of the Prophet sallallahu 'alayhi wa sallam in Madinah. Upon hearing his voice, people started to cry for it reminded them of the days of the Prophet sallallahu 'alayhi wa sallam.

On his death bed, Bilal's last words were, "Tomorrow you will meet you loved ones, Muhammad and his Companions." He died in Aleppo at the age of sixty four. His memory is still alive with us today whenever we hear the adhan.

To maintain nice relations with the people is half of intelligence, nice questioning is half of knowledge, and nice domestic arrangements is half of the management of livelihood.