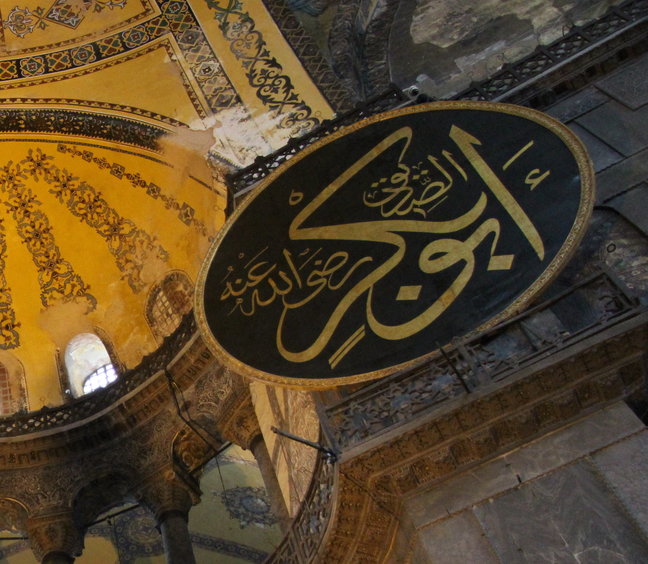 A display with Abu Bakr's name written in Arabic at the Hagia Sofia, Istanbul (modified) by Rabe! (own work) [CC BY-SA 3.0], via Wikimedia Commons

Abu Bakr the First Among Men to Enter Islam

Abu Bakr was always a very close Companion of the Holy Prophet, he knew him better than any other man. He knew how honest and upright the Prophet was. Such knowledge of the Prophet made Abu Bakr be the first man to follow the Message of Prophet Muhammad sallallahu 'alayhi wa sallam. He was indeed the first adult male to accept Islam.

The Holy Prophet told Abu Bakr what had happened at Mount Hira', he told him that Allah subhanahu wa ta'ala had revealed to him and made him His Messenger. When Abu Bakr heard this from the Prophet sallallahu 'alayhi wa sallam, he did not stop to think, he at once became a Muslim. He submitted to Islam with such determination that once the Holy Prophet himself remarked, "I called people to Islam, everybody thought over it, at least for a while, but this was not the case with Abu Bakr, the moment I put Islam before him, he accepted it without any hesitation." He was titled as-Siddiq by the Prophet because his faith was too strong to be shaken by anything.

In fact, Abu Bakr was more than a great believer, as soon as he became a Muslim, he immediately began to preach Islam to others. Among those who accepted Abu Bakr's invitation to Islam were 'Uthman, Az-Zubayr, Talhah, 'Abdur-Rahman ibn Awf, Sa'ad ibn Waqqas and others who later became the pillars of Islam.

Abu Bakr's love of the Prophet sallallahu 'alayhi wa sallam was so great that he was willing to sacrifice his life for the sake of protecting and comforting the Prophet saw. Such love and sacrifice were demonstrated when one day the Holy Prophet was saying his prayers in the Ka'bah, while some of the chiefs of Makkah were sitting in the court yard of the Ka'bah. Seeing the Prophet praying, 'Uqbah ibn Abi Mu'it took a long piece of cloth and put it around the Prophet's neck and twisted it hard in an attempt to strangle the Prophet sallallahu 'alayhi wa sallam to death. At that moment Abu Bakr happened to pass by from a distance, he saw 'Uqbah trying to strangle the Prophet to death. Immediately Abu Bakr ran to the help of the Prophet, he pushed 'Uqbah aside and took the cloth from aroundthe Prophet's neck. Thereupon the enemies of Islam came down upon Abu Bakr and beat him unmercifully, although Abu Bakr with faith like a rock did not care for his own suffering, he was glad that he was able to save the Prophet of Allah, even at the risk of his own life.

Abu Bakr with the wealth he had, also had a major role in freeing some of the Muslim slaves, who were barbarically tortured by their heartless Mushrik masters to give up the faith and return to their masters' beliefs. The heartless monsters tried all kinds of torture: they made them lie all naked on the burning desert sand, putting big stones on their chest, as well as other kinds of torture. Here Abu Bakr's wealth came to the rescue, as he bought the poor helpless slaves from their inhuman masters and set them free, Bilal al-Habashi, the slave of 'Umayyah ibn Khalaf, was among those who were set free by Abu Bakr. Bilal became afterwards the mu'adhin at the Prophet's mosque.

Islam was growing rapidly in Makkah, the enemies of Islam were getting frustrated by this rapid growth. The chiefs of Makkah found that it is necessary for them to get rid of the Prophet sallallahu 'alayhi wa sallam before Islam can cause a real threat to them, so they planned to kill the Prophet. Allah subhanahu wa ta'ala revealed to his Prophet the intentions of the non-believers and ordered him to migrate to Madinah. So the Prophet quickly went to Abu Bakr's house who was among the few that were left in Makkah with the majority of Muslims having already migrated to Madinah.

The Prophet informed Abu Bakr that he was commanded to migrate to Madinah that night and that he has chosen him to have the honor of joining him on his migration. Abu Bakr's heart was full of joy, "I have been looking forward to this day for months," he exclaimed.

The Makkans were so eager to find the Prophet they were searching for him like mad hounds. Once they came to the mouth of the cave, Abu Bakr grew pale with fright, he feared not for himself, but for the life of the Holy Prophet. However, the Prophet sallallahu 'alayhi wa sallam remained calm and said to Abu Bakr, "do not fear, certainly Allah is with us". Such words quickly calmed down Abu Bakr and brought back tranquility to his heart.

Abu Bakr, being the closest of Companions to the Prophet sallallahu 'alayhi wa sallam, took part in all the battles that Prophet Muhammad had fought.

At 'Uhud and Hunayn, some members of the Muslim army showed signs of weakness, however, Abu Bakr's faith never wavered, he always stood like a rock by the side of the Prophet.

Abu Bakr's faith and determination to raise the banner of Islam were so great that at Badr, one of his sons, who had not yet embraced Islam was fighting among the enemies, Abu Bakr was so eager to find his son in the battle that he was searching for him amongst the enemies in order to slay him.

Tabuk was the last expedition of the Holy Prophet. He was keen to make it a great success, he therefore asked people to help the expedition with whatever they could. This brought the best out of Abu Bakr who beat all records as he took all his money and household articles and heaped them at the Prophet's feet.

"Have you left anything for your children?" asked the Prophet. Abu Bakr then responded with great faith "Allah and his Messenger are enough for them." Companions standing around were stunned they realized that whatever they do they could not outdo Abu Bakr in the field of service to Islam.

The Successor of the Prophet

The first Hajj under Islam was in the ninth year of Hijrah. The Prophet sallallahu 'alayhi wa sallam was too busy at Madinah to lead the Hajj, so he sent Abu Bakr as his agent, he was to lead the Hajj in place of the Prophet.

The Prophet sallallahu 'alayhi wa sallam led the prayers himself ever since he arrived to Madinah. During his last illness, the Prophet could no longer lead the prayers, he was too weak to go to the mosque, he therefore had to choose someone to fill such high position after him. Abu Bakr was also the one who was honored to be chosen by the Prophet for such a task.

Thus in the lifetime of the Prophet, Abu Bakr came to fill the highest position under Islam (leading prayers). While one day Abu Bakr was away 'Umar was appointed by the Companions to lead the prayers in his absence. Realizing the change of voice, the Prophet said, "This is not Abu Bakr's voice, no one but he should lead prayers, he is the fittest person for this position."

When the news of the Prophet's death came out, many Muslims were confused and stunned. 'Umar himself was so overcome with emotions that he drew his sword and declared, "If anyone says that the Messenger of Allah is dead, I will cut off his head."

Muslims stayed in such state until Abu Bakr arrived and gave his famous address: "O People! If anyone among you worshipped Muhammad, let him know that Muhammad is dead. But those who worshipped Allah, let them know that He lives and will never die. Let all of us recall the words of the Qur'an. It says:

'Muhammad is only a Messenger of Allah, there have been Messengers before him. What then, will you turn back from Islam if he dies or is killed?' "

Suddenly Abu Bakr's words started to sink in, and in no time confusion was gone.

Having shrugged off the shocking news of the Prophet's death, Muslims realized that they need someone to fill the position of leadership amongst them.

The two main groups amongst Muslims were Muhajirun (refugees from Makkah), and Ansar (the people of Madinah). The Ansar gathered at the Thaqifah Bani Saydah their meeting place. Sa'ad ibn Abadah, the Ansar leader, suggested that the Caliph should be from amongst them. Although many refused saying that the Muhajirun in right have a better claim to Khilafah. When the news reached Abu Bakr, he quickly went to their gathering, fearing that confusion might spread once again, and said, "Both Muhajirun and Ansar have done great service to Islam. But the former were the first to accept Islam, they were always very close to the Messenger of Allah. So, O Ansar, let the Caliph be from amongst them." After a short discussion, the Ansar agreed that they should choose the Caliph from amongst the Muhajirun, being from the tribe of Quraysh and being the first to accept Islam.

Abu Bakr then asked people to choose between 'Umar ibn al-Khattab and Abu 'Ubaydah ibn al-Jarrah. Hearing this, both men jumped to their feet and exclaimed "O Siddiq, how can that be? How can anyone else fill this position as long as you are among us? You are the top man amongst he Muhajirun. You were the Companion of the Prophet sallallahu 'alayhi wa sallam in the Thawr cave. You led prayers in his place, during his last illness. Prayer is the foremost thing in Islam. With all these qualifications you are the fittest person to be the successor of the Holy Prophet. Hold out your hand that we may pledge loyalty to you."

But Abu Bakr did not stretch out his hand. 'Umar saw that the delay might lead to the reopening of the disagreements so he himself took Abu Bakr's hand out and pledged loyalty to him. Others followed by example, and Abu Bakr became the first Caliph by general consent of the Muslims.

In the next day, Abu Bakr addressed the gathering of Muslims in the Prophet's mosque urging them to continue their path as true Muslims and to give him loyalty and support as long as he is obeying the Commands of Allah subhanahu wa ta'ala and His Messenger.

Such was the quality of the humble and generous Companion who believed the Prophet in everything to the extent that he was called As-Siddiq, by the Prophet. His great personality and service to Islam and Muslims earned him the love and respect of all Muslims, so that he was chosen as the first Caliph after the death of the Prophet by all Muslims. Insha'Allah in the next issue we will talk about his qualities as a leader and his success as a Caliph.

Do not sit idle, for indeed Death is seeking you.