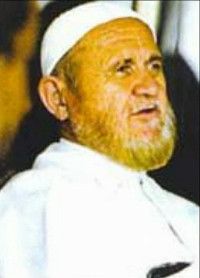 Just now I said to one of my brothers who asked me, and how often I am asked, to this day the people are still asking me about meat from Bulgaria, and in reality I'm amazed at them - we've been sorely tried by [this issue] of Bulgarian meat for many long years, [after] all of these years hasn't the time come for the Muslims to understand what the ruling concerning this Bulgarian meat is? Such a strange thing!

So subhaanallah! The feeling of brotherhood has died which the Prophet (sallallahu 'alayhi wa sallam) described as being that of one body:

"The believers in their mutual kindness, compassion and sympathy are just like one body. When one of the limbs suffers, the whole body responds to it with wakefulness and fever."

The Muslims do not feel the many pains of their brothers any more, the Islamic bonds between them have been cut off, and for this reason their concern [instead] is to ask, "Is it allowed to eat Bulgarian meat or not?!"

Ya akhi, you know that the Bulgarians are slaughtering the Muslims there, there is no difference between an Arab Muslim, a Turkish one, an Afghan Muslim and so on, and the situation is as he (sallallahu 'alayhi wa sallam) said, "The Muslims are brothers …," so if we are brothers, then it is obligatory on us to jealously protect each other and to feel grief for each other - and not merely be concerned with what one eats and drinks.

So if we assumed that a person is still not convinced that Bulgarian meat is [just] carrion … that its ruling is that it is meat of an animal that is not slaughtered according to the legislated requirements because it is killed not slaughtered - we can't convince the people of every opinion, because they will continue to differ except those upon whom your Lord has mercy, as is mentioned in the Noble Qur'an - so if we can't convince the people that this meat which comes to us from Bulgaria has the ruling of being meat that has not been slaughtered Islamically - but don't they [at the very least] know that these Bulgarians are slaughtering our Muslim brothers there? Isn't this tyranny and this excruciating aggression against our Muslim brothers there enough to turn us away from Bulgarian meat, even if it is halal?

And this is a reminder, and a reminder benefits the believers.