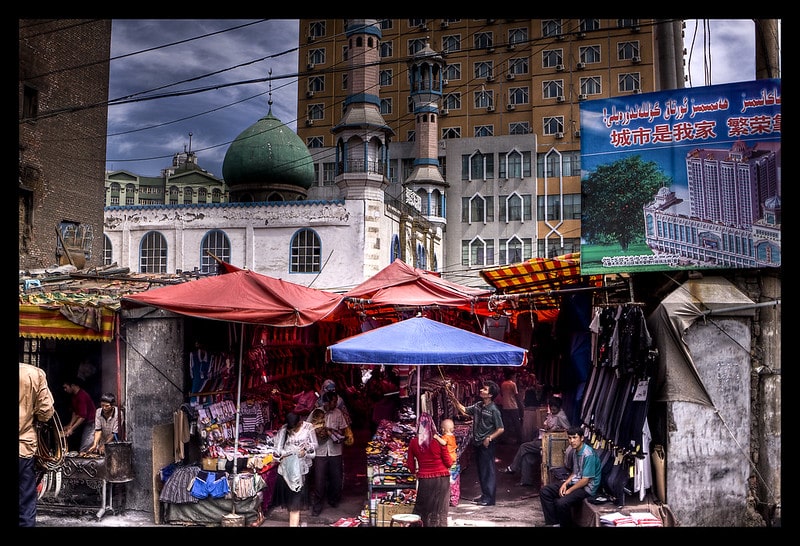 Uighur Market in Urumqi by Dmitry P via Flickr [CC BY 2.0]

A Muslim woman who escaped from a state "re-education" camp in China has said inmates were gang raped, subjected to torture and medical experiments and forced to eat pork.

Sayragul Sauytbay, a Chinese Muslim of Kazakh descent, said she was detained by the state in November 2017.

The 43-year-old teacher was escorted by armed men to a camp, where she was held for several months, according to Haaretz. She was ordered to teach inmates Chinese.

"It was forbidden to speak with the prisoners, forbidden to laugh, forbidden to cry and forbidden to answer questions from anyone," she said. "There were almost 20 people in a room of 16 square meters. There were cameras in their rooms, too, and also in the corridor. Each room had a plastic bucket for a toilet. Every prisoner was given two minutes a day to use the toilet, and the bucket was emptied only once a day."

Ms Sautybay said women were systematically raped and that she was forced to watch a woman be repeatedly assaulted.

"The policemen ordered her to disrobe and simply raped her one after the other, in front of everyone,” she told Haaretz. "While they were raping her they checked to see how we were reacting. People who turned their head or closed their eyes, and those who looked angry or shocked, were taken away and we never saw them again. It was awful. I will never forget the feeling of helplessness, of not being able to help her.”

She added: "On an everyday basis the policemen took the pretty girls with them, and they didn’t come back to the rooms all night."

China is believed to have detained more than a million people from mostly Muslim ethnic minorities in the province of Xinjiang since 2017.

Global concern over the camps has increased in recent months, with Mike Pompeo, the US secretary of state, calling Beijing’s treatment of Muslim minorities "the stain of the century."

Ms Satuybay said that as well as torture, prisoners were also subjected to mysterious human experiments.

"The inmates would be given pills or injections," she said. "[They] had different kinds of effects. Some prisoners were cognitively weakened. Women stopped getting their period and men became sterile."

The 43-year-old was instructed to teach the prisoners Communist Party propaganda songs and slogans. As a camp teacher she avoided the very worst of the alleged conditions. The inmates were forced to recite slogans such as: "I love China," "Thank you to the Communist Party," "I am Chinese" and "I love Xi Jinping". Ms Sautybay also said that all inmates, including observant Muslim prisoners, were forced to eat pork.

“The food was bad, there weren’t enough hours for sleep and the hygiene was atrocious,” the teacher said.

In March 2018 the 43-year-old was released from the camp and ordered to return to her former role as the director of five nurseries. She was fired three days after returning and once again interrogated by police officers, who accused her of treason.

Ms Sautybay was told she would return to a camp as a regular inmate instead of a teacher.

"Having already been in a camp, I knew what it meant. I knew I would die there, and I could not accept that," she said. "I said to myself that if I was already fated to die, at least I was going to try to escape."

The 43-year-old escaped by climbing through a window to a neighbour’s house. She then took a taxi to China’s border with Kazakhstan, which she managed to cross.

"In Kazakhstan I found my family," she said. “My dream came true. I could not have received a greater gift."

Ms Sauytbay was arrested by Kazakhstan’s secret service for crossing the border but was eventually granted asylum in Sweden.

“The world must find a solution so that my people can live in peace," she said. "The democratic governments must do all they can to make China stop doing what it is doing in Xinjiang."

Beijing has denied the 43-year-old’s allegations. The Independent has contacted the Chinese embassy in London for comment.

Published in the Independent newspaper on 22 October 2019, reproduced under fair dealing/fair use provisions of applicable copyright law. You can view the original article here (along with a related video).

A man who wanted to write hadith would [learn] manners and worship for twenty years before starting.