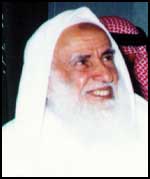 He was, rahimahullah, Abu 'Abdullah Muhammad ibn Salih ibn Muhammad ibn Al-'Uthaymin at-Tamimi an-Najdi. Shaykh ibn 'Uthaymin, as he was most known, was born in the city of 'Unayzah, Qasim Region, Saudi Arabia, on 27th Ramadhan 1347H in a famous religious family.

When he entered into teaching, a great number of students from inside and outside Saudi Arabia benefited from him. He was known for his own unique style of interpretation and explanation of religious points. He is from among those scholars who served Islam without any type of religious prejudice and kept themselves away from the limitations of blind-following. He is distinguished in his great exertion of effort in religious matters and analogical deductions which clearly prove the religious understanding he possessed, and the correct usage of the principles of religion he adopted.

Along with Shaykh Nasir ud-Din al-Albani (d. 1420H) and Shaykh 'Abdul-'Aziz ibn Baz (d. 1420H) he is from great scholars of the 14th century hijri, although many more deserve to be mentioned.

In giving religious verdicts, they were based on the manhaj of Ahlus-Sunnah wa'l-Jama'ah and evidenced from the Qur'an and Sunnah. He has about fifty compilations to his credit. Recently before his death, he was teaching religious fundamentals at the Shari'ah Faculty of Imam Muhammad ibn Sa'ud Islamic University, Qasim Branch. He was also a member of the Committee of Senior Scholars of the Kingdom, and was the Imam and Khatib of the Mosque of 'Unayzah city.

Among his well-known works are:

Shaykh ibn 'Uthaymin was famous for his simplicity, modesty, along with exceptional mannerisms towards all those he encountered. He passed away on Wednesday 15 Shawwal, 1421H. He was buried in Makkah amongst his peers including Shaykh ibn Baz.

May Allah have mercy upon him the Shaykh and enter him into the highest levels of Paradise. Amin.

Concerning the Imam, the Shaykh - Muhammad ibn Salih ibn Al-'Uthaymin (rahimahullah), it has been narrated by Muhammad ibn 'Abdul-Jawad as-Sawi:

"Once the Shaykh was invited by one of the charity organisations in Jeddah, and the meeting prolonged into the night, close to one o'clock in the morning; and it was not the habit of the Shaykh to remain awake like this. It was noticeable that he was overcome with exhaustion and tiredness and it was evident he needed sleep, so we returned to the house where the Shaykh was staying, and we entered and fell asleep right away.

In the middle of the night, at about 3:30am, after we had been sleeping for about only two hours – since we fell asleep at about 1:30 – I noticed the sound of the Shaykh reciting in prayer; and this at a time when he was desperately in need of sleep and rest, (yet) he was standing before his Lord praying." [Safahat Mushriqah min Hayat Al-Imam Muhammad ibn Salih ibn Al-'Uthaymin - p.73]

"I saw you with my own eyes talking to him and greeting him ... "

Concerning the Imam, the Shaykh - Muhammad ibn Salih ibn Al-'Uthaymin (rahimahullah), 'Abdullah ibn 'Ali al-Matawwu narrates that he accompanied the Shaykh (from 'Unayzah) to Al-Bada'i – which was a distance of 15 kilometres from 'Unayzah – for a lunch invitation.

After lunch, on their return home they noticed a man with a red beard (possibly dyed with henna), and a peaceful look about him waving his hand. The Shaykh said, "Slow down, we'll take him with us." So the Shaykh said to him, "Where do you want to go?"

He said: "Take me with you to 'Unayzah."

So the Shaykh said to him, "On two conditions: First, that you do not smoke, and second, you increase in the remembrance of Allah."

The man responded: "As for smoking, then I do not smoke, however, I was a passenger with a man who smoked and (because of this) I asked him to drop me off (here), and as for the remembrance of Allah, there is no Muslim except that he remembers Allah."

So the man got in the car.

So the Shaykh said to him: "Why did you not ask him when you met him in Al-Bada'i?"

The Shaykh said: "I saw you with my own eyes talking to him and greeting him."

So the man said: "You are making fun of a man who is older than your father!"

The Shaykh smiled and said to him: "Pray the 'Asr prayer at this (masjid) Jami' (Jami' 'Unayzah) and you shall see him."

The man then left without knowing he was talking to Shaykh Ibn 'Uthaymin himself.

After he finished praying the 'Asr prayer, he saw the Shaykh in front having led the congregation in prayer. So he asked about him, and was informed that he is the Shaykh. So he approached the Shaykh and excused himself that he had not known (recognised) him (earlier), then asked his question. The Shaykh answered his question, and the man began to cry, supplicating for the Shaykh. [Al-Jami' li-Hayat al-'Allamah Muhammed ibn Salih ibn Al-'Uthaymin – p.38]

Learn what you will, but know that so long as you do not implement what you learn, Allah will give you no reward for it.