This right is the greatest right of any of the creation. None of the creation have a right greater than the rights of Allah's Messenger sallallahu 'alayhi wa sallam. Allah - the Most High - said:

"Indeed We have sent you as a witness rind a bringer of good-tidings and a warner, in order that mankind may believe in Allah and His Messenger, and that you may assist and honour the Messenger." 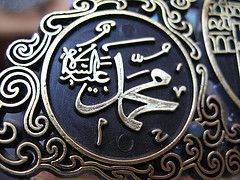 Muhammad, peace be upon him

Therefore it is obligatory to love the Prophet sallallahu 'alayhi wa sallam over and above any of mankind - even above one's love for himself, his parents and his children. The Prophet sallallahu 'alayhi wa sallam said: "None of you will truly believes until he loves me more then his parents, his children and the whole of mankind." {qluetip title=[1]}Related by Al-Bukhari (1/57) and Muslim (no. 44), from Anas radhiallahu 'anhu{/qluetip}

'Urwah ibn Mas'ud said to the Quraysh: "O my people! I have seen kings. I have seen Caeser, Chouoes and Negus. But by Allah! I have never seen a king whose companions respect and honor him in the way that the Companions of Muhammad honour Muhammad sallallahu 'alayhi wa sallam. By Allah! When he spits, the spittle would fall into the hands of one of them, who would then rub his face and skin with it; when he orders them with something, they promptly fulfill it; when he performs wudhu' (ablution), they vie with each other for the remains of the water; and when they speak in his presence, they lower their voices and do not look directly at his face, due to their respect and honour for him."{qluetip title=[2]}Related by Al-Bukhari (no. 2731) and Ahmad (3/324), from the lengthy narration of Miswar ibn Makhramah radhiallahu 'anhu{/qluetip}

So this is how the Companions radhiallahu 'anhum loved and honoured him, for Allah had endowed and blessed the Prophet sallallahu 'alayhi wa sallam with a generous and noble character and a mild and easy-going nature. Had he been harsh and hard-hearted, people would not have been able to gather around him and be with him as they did.

Also from the rights that are due to the Prophet sallallahu 'alayhi wa sallam is to believe in all that he informed as of with regards to the accounts of previous people and nations, to do that which he has commanded and leave that which he has prohibited, and to have 'iman (faith) that his guidance and example is the best and most perfect guidance and example, and that the Shari'ah (Prescribed Laws) that he was sent with is perfect and complete - no human laws nor systems are to be given precedence or priority over his Shari'ah. Allah - the Most High - said:

"But no by your Lord! They will not truly be Believers, until they make the Prophet a judge in all their disputes, and then find in their souls no resistance against his decision, but rather accept it with the utmost submission."

"Say: If you do love Allah then follow the Prophet. Allah will then love you and forgive you your sins. Indeed Allah is Oft-Forgiving, Most-Merciful."

And from the rights of the Prophet sallallahu 'alayhi wa sallam is to defend his Shari'ah and his guidance with the strength and capacity at one's disposal, and also in proportion to the attack that it is under. Thus, if the enemies are attacking it with false proofs and doubts, then his guidance and Shari'ah should be defended with sound knowledge which refutes such false arguments and clarifies the doubts. If, however, the attack is made by any other types of weapons, then the defence should be made in a similar manner. It is not possible for any Believer to hear of some attack upon the Prophet's Shari'ah or his noble personality, and then to keep silent about it - especially when one has the power to counter such on attack.

Rasulallah (the Messenger of Allah)