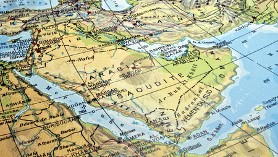 ... The third aspect the event refers to concerns the reality of the Arabian situation at the time. The Arabs did not have any role to play on the face of the earth; they did not have an identity of their own before Islam. In the Yemen they were subjugated by either the Persians or the Abyssinians. If they had any government of their own it was under the protection of the Persians. In the north, Syria was subject to the Byzantine rule which was either direct or in the shape of an Arab government under the protection of the Byzantines. Only the heartland of the Arabian Peninsula escaped foreign rule. But this also was in a state of tribalism and division which deprived it of any weight in world power politics. Tribal war could drag on for forty years or morel but neither individually nor as a group did these tribes count as a power in the eyes of the neighbouring mighty empires. What happened with regard to the "Elephant" aggression was a correct assessment of the real force of these tribes when faced with a foreign aggressor.

Under Islam the Arabs had, for the first time in history, an international role to play. They also had a powerful state to be taken into consideration by the world powers. They possessed a sweeping force that destroys thrones, conquers empires, and brings down the false, deviating and ignorant readerships in order to take over the leadership of mankind. But what facilitated these achievements for the Arabs for the first time in their history was that they forgot their Arabism. They forgot the racial urges and fanaticism. They remembered that they were Muslims, and Muslims only. They carried the message of a forceful and allcomprehensive faith, which they delivered to humanity with mercy and compassion. They did not uphold any sort of nationalism or factionalism. They were the exponents of a Divine idea which gives mankind a Divine, not earthly, doctrine to be applied as a way of life. They left their homes to struggle for the cause of Allah alone. They were not after the establishment of an Arab-empire under which they may live in luxury and conceit. Their aim was not to subjugate other nations to their own rule after freeing them from the rule of the Byzantines or the Persians. It was an aim clearly defined by Raba'i ibn Amir, the Muslims' messenger to the Persian commander, when he said in the latter's headquarters:

Then and only then, did the Arabs have an identity, a power and a leadership. But all of these were devoted to Allah alone. They possessed their power and leadership as long as they followed the right path. But when they deviated and followed their narrow nationalistic ideas, and when they substituted for the banner of Islam that of factional bonds, they came under subjugation by other nations. For Allah deserted them whenever they deserted Him; He neglected them as they neglected Him.

What are the Arabs without Islam? What is the ideology that they gave, or they can give to humanity if they abandon Islam? What value can a nation have without an ideology which it may present to mankind? Every nation which assumed the leadership of humanity in any period of history advanced an ideology. Nations which did not, such as the Tartars who swept over the east, or the Berbers who crushed the Roman Empire in the west, could not survive for long. They were assimilated by the nations they conquered. The only ideology the Arabs advanced for mankind was the Islamic faith which raised them to the position of human leadership. If they forsake it they will no longer have any function or role to play in human history.

The Arabs should remember this well if they want to live and to be powerful and to assume the leadership of mankind. It is Allah who provides guidance for us lest we go astray.