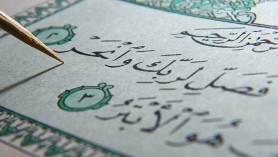 In the Name of Allah, the Most Beneficent, the Most Merciful

1. Verily, We have given you Al-Kauthar,

2. So turn in prayer to your Lord and sacrifice,

3. For he who makes you angry, he will be cut off.

It is narrated that Anas ibn Malik said, "The Messenger of Allah sallallahu 'alayhi wa sallam was dozing and then he raised his head and smiled, then either he said to them (the Companions), or they said to him: "Why did you laugh?" The he sallallahu 'alayhi wa sallam said: "Verily, a surah has been revealed to me." Then he recited, "In the Name of Allah, the Most Beneficent, the Most Merciful, Verily We have given you Al-Kauthar ... " to the end of the Surah. The he asked, "Do you know what Al-Kauthar is?" They replied, "Allah and His Messenger know best." He said: "It is a river granted to me by my Lord, the Almighty, the All-Powerful in Paradise, in which is great goodness; its drinking vessels are as (limitless as) the heavenly bodies. It refuses to allow one of the slaves to drink, and the Prophet will say: 'Oh, my Lord! He is one of my community.' But it will be said to him: 'You know nothing of the innovations (in religion) that they practiced after you.'"

It has been narrated about the pool of Al-Kauthar that it has two streams running into it from the heavens which emanate from the river known as Al-Kauthar and its drinking vessels are as limitless as the stars in the sky.{qluetip title=[1]}Narrated by Muslim, Abu Dawud and An-Nasa'i{/qluetip} Many qurra' (scholars of Qur'anic recitation) have taken this as proof that the Surah was revealed in Madinah, while many fuqaha' have deduced from it that the basmalah is an integral part of the Surah and that it was revealed from it.

Al-Bukhari relates on the authority of Ibn 'Abbas that he said Al-Kauthar is the blessings bestowed on the Messenger sallallahu 'alayhi wa sallam by Allah. Abu Bishr then told Sa'id ibn Jubayr (who narrated it from Ibn 'Abbas): "But people say that it is a river in Paradise." Sa'id replied: "The river in Paradise is from the blessings bestowed by Allah upon him sallallahu 'alayhi wa sallam." Mujahid said, "It is the abundant blessings of this world and the Hereafter." And it has been confirmed that Ibn 'Abbas also explained it (Al-Kauthar) as being a river.

Ibn Jarir narrates on the authority of Ibn 'Abbas that he said: "Al-Kauthar is a river in Paradise, its banks are of gold and silver and its bed is of precious stones and pearls and its water is whiter than snow and sweeter than honey." Something very similar was narrated on the authority of Ibn 'Umar and At-Tirmidhi narrates something like it in a mawquf form, while Ahmad has narrated it in a marfu' form.

"So turn in prayer to your Lord and sacrifice"

That is, since We have given you such blessings in this world and in the Hereafter, including the river described previously, then devote your obligatory and your optional prayers to your Lord Alone, likewise your sacrifices and all your acts of worship. Worship Him Alone, without associating any partners with Him and sacrifice in His Name Alone, without associating any partners with Him, as in the Words of Allah: "Say: Verily, my prayer and my sacrifice and my life and my death are for Allah, the Lord of the worlds. No partner has He, this I have been commanded to do and I am the first to submit [to Allah]." [Al-Qur'an 6:162] Ibn 'Abbas, 'Ata', 'Ikrimah, Mujahid and Al-Hasan are all agreed that the word nahr means halal slaughter - most of the scholars from amongst the pious Salaf agreed with this and it is contrary to the practices of idolaters who prostrated themselves before false gods and sacrificed animals in their name. Allah, Most High says: "And do not eat of that which was not slaughtered in the Name of Allah." [Al-Qur'an 6:121] The word nahr was also interpreted as meaning the position of the hands when slaughtering and to the raising of the hands in prayer, at the time of the opening takbir (saying "Allahu Akbar" in the prayer) and an instruction to face the Qiblah (the direction which Muslims face when they pray, i.e. the Ka'bah in Makkah) when slaughtering; but all of these sayings are very unusual, and the correct interpretation is the first, i.e. that it refers to halal slaughter. Because of this, the Messenger of Allah, sallallahu 'alayhi wa sallam, used to pray 'Eid prayer before slaughtering an animal, and he said: "Whoever prayed and then slaughtered has performed the slaughter (correctly) and whosoever slaughters before prayer, there is no slaughter for him." Then a Companion named Abu Bardah stood up and said, "Oh, Messenger of Allah! I have slaughtered my sheep before the prayer for I knew that today was a day on which the meat would be desirable (for slaughter)." He sallallahu 'alayhi wa sallam said: "Your sheep is merely meat (i.e. it is not acceptable as a sacrifice)." Abu Bardah then asked: "I have a young, female goat which is dearer to me than two sheep - is this sufficient recompense from me?" The Prophet sallallahu 'alayhi wa sallam said: "It would recompense you but it would not recompense anyone after you." The correct interpretation of the verse, according to Ibn Jarir is: "So make all your prayers for your Lord and for Him Alone and for no other, neither partner, nor deity; likewise make your sacrifices for Him Alone, not to any idols - in gratitude to Him for the provision and generosity which He has given you which is without equal."

"For he who makes you angry, he will be cut off"

That is, the one who hates you, oh, Muhammad, and hates that which you have brought (i.e. the Message of guidance, truth and proof most clear and light most evident) is defective, insignificant, despised and is cut off (from remembrance).

According to Ibn 'Abbas, Mujahid, Sa'id ibn Jubayr and Qatadah, the Surah was revealed in regard to Al-'As ibn Wa'il, for it was said that Al-'As ibn Wa'il used to say, whenever Allah's Messenger, sallallahu 'alayhi wa sallam, was mentioned: "Leave him, for he is a man who is cut off and is of no consequence, and if he were killed, he would be forgotten." And so Allah revealed this Surah. It was also said that it was revealed concerning 'Uqbah ibn Abi Mu'it.

Ibn 'Abbas and 'Ikrimah are reported to have said that it was revealed in regard to Ka'b ibn Al-Ashraf and a number of the pagans of Quraysh.

Al-Bazzar reports from Ibn 'Abbas that Ka'b ibn Al-Ashraf approached Makkah and the people of Quraysh said: "You are their leader (i.e. the people of Makkah). Do you not see this weak, feeble, despised man, who is without family or any who might help him and who is cut off from his own people? He claims that he is better than we! We are the people of (the House of) the pilgrims, the custodians (of the Ka'bah), the suppliers of water (to the pilgrims)." He said: "You are better than he." So Allah revealed this Surah. This is an authentic narration.

'Ata' said that it was revealed concerning Abu Lahab; this was when the Prophet's son died and Abu Lahab went to the polytheists and said: "When his sons die, he will no longer be remembered." Far from that! On the contrary, Allah has preserved his memory for all the world to witness and has placed the responsibility of (implementing) His Revealed Law upon their shoulders forever, until the Day of Congregation and the appointed time arrives - peace and blessings of Allah be upon him always till the Day of Assembly.

This is the end of the tafsir of Surah Al-Kauthar, all praise is due to Allah and from His proceeds all Grace.