God strikes a parable about His light within the heart of His servant, which only the learned understand:

"God is the light of the heavens and the earth. The similitude of His light is a niche in which there is a lamp. The lamp is in a Glass, the Glass, like a glistening star, kindled from a blessed olive tree, neither of the east nor of the west, whose oil well nigh glows though no fire has touched it: light upon light. God guides to His light whom He wills, and God strikes parables for human beings, and God knows all things."

Ubayy ibn Ka'ab said, "The similitude of His light [takes place in] the Muslim's heart." [Ibn Kathir, 3:464] This light, which He has placed in the heart, comes from gnosis, love, faith and the remembrance of God. It is the light that He has sent down to His servants, by which He gives them life, and by which they walk among people. Its origin is in their hearts, but then He strengthens and increases it until it appears upon their faces, limbs, bodies, even their clothes and dwellings. People of this nature perceive it, while others deny it. On the Day of Judgement, however, it will come forth by their faith, and hasten before them in the darkness of the Bridge, that they might cross it. They will proceed in proportion to either its strength or its weakness in their hearts during their life in the world. 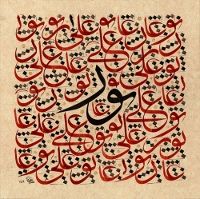 For one person, it will be like the sun, for another like the moon, the stars or a lamp. For yet another, this light will be only at the tips of his toes; it will shine, then go out [then shine, then go out]. For just as his light had been in this world, so he shall be given when crossing the Bridge. In fact, it is the selfsame light that had appeared to him before. However, just as the hypocrite has no real light in this world, or has only an outward light but none within, so shall he be given [on that Day] an outward light which will vanish in the darkness and be lost.

It is about this light-its abode, its bearer and its fuel-that God has coined the parable of the niche, which is like the breast. In this niche lies a globe made of purest glass, like a glistening planet in whiteness and purity-a similitude for the heart, likened to glass inasmuch as it possesses the qualities of the believer's heart: clarity, fineness and firmness. By its clarity [the believer] sees truth and direction; by its fineness he acquires kindness and mercy; by its firmness he combats God's enemies, and stands firm in his resistance to them and upholds the truth.

None of these qualities negate another or oppose it. They strengthen and complement each other.

"[The faithful are] strict against the unbelievers, merciful to each other."

"By the mercy of God, you were gentle to them. For had you been harsh, or hard of heart, they would have fled from your presence."

"O Prophet, strive against the non-believers and the hypocrites and be firm against them."

According to a saying that has been passed down, "Hearts are God's vessels on earth, and most beloved unto Him are the finest, firmest and clearest of them." [Al-Hakim, At-Tirmidhi ... It also appears in Ahmad ibn Hanbal's Kitab az-Zuhd, 1414/1993, and Isfahani (Hilya, 6:97), with the wording "God, blessed be He, has vessels on earth ... "]

In contrast to this heart, there are two other reprehensible types. One is the heart that is hard like stone, devoid of compassion, generosity or social good; devoid, too, of the clarity by which God may be seen-a heart dominated by ignorance, with neither knowledge of the truth, nor compassion for fellow creatures.

The other is the heart that is as weak as water. It is devoid of strength and firmness, accepts any idea, but lacks the strength to stand by what it accepts. It is devoid of the power to affect anyone, but is itself affected by everything it mingles with-be it strong or weak, wholesome or tainted.

In the glass there is a lamp which bears the light. The fuel for this light is oil pressed from an olive tree, [which grows] in a place so medial that the sun reaches it at both the beginning and the end of the day, making its oil the purest and least opaque-so clear it almost glows by itself, without fire.

Because this oil is so limpid that it almost glows by itself, when it is mingled with fire its glow becomes even more intense, its substance is strengthened and there is "light upon light". Similarly, the heart of the believer is so illumined that he could almost know God solely by way of his own God-given nature [fitra] and his own intelligence, though he had no fuel. Then the fuel of revelation reaches him, gives glad tidings to his heart and mixes with his own radiance. The light of revelation is added to the light of his own God-given nature, and the two combine to become "light upon light".

He had almost been able to speak of God without ever hearing anything about Him. When he hears utterances which his own nature has already perceived, it becomes "light upon light". Such is the case of the believer who first experiences the truth in a general way through his God-given nature, and then hears the words brought by [the Prophet] which explain the details. His faith is thus founded on the testimony of revelation and the testimony of his God-given nature.

Let a person of insight reflect on this great verse and on how it can be applied according to this noble meaning. God mentions His light in the heavens and on earth, and His light in the hearts of His believing servants. There is intelligible light, perceived by insight, illuminating inner visions and hearts [an-nur al-ma'qul al-mashhud bi'l-basa'ir wa'l-qulub]. And there is the physical light [an-nur al-mahsus], perceived by the faculty of sight, illuminating the upper and the lower regions of the world: two sublime lights, one more sublime than the other. When physical light is absent from some place, no human being or animal can live there. Animal life is engendered only where there is light. It cannot thrive in dark places where no light shines. And so, a people for whom the light of revelation and faith has gone out, and a heart in which this light has gone out, must be dead, no more alive than the most lifeless place on earth.

In His words, God connects life with light: "Or is one who was dead, and whom We gave life and made for him a light by which to walk among people, like one who is in a darkness from which he cannot emerge?" [Al-Qur'an 6:122] Or His words, "Thus have We inspired you with a spirit from Our command; you had known neither the Book nor faith, but We made it a light by which We guide those of Our servants whom We Will." [Al-Qur'an 42:52]

About this second verse, it has been said that the pronoun "it" refers to command, or to faith, but the correct reading is that it refers to spirit. Thus, "We made that spirit with which We inspired you a light." In other words, we say spirit when life is brought forth, and light when radiance and illumination are brought together. But the two are inseparable. If life exists through the Spirit, so does light; and where there is light, there is also light. So the heart of one who does not accept this Spirit is dead and benighted, as dead as one whose soul has separated from his body.

O my soul, it is not for a few days patience, As if her extent were a few dreams. Oh my soul, pass quickly on through this world, And leave it, for indeed life lies ahead of it.