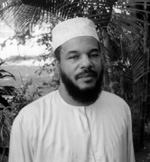 Dr. Abu Ameenah Bilal Philips was born in Jamaica, but grew up in Canada where he accepted Islam in 1972. He completed a diploma in Arabic and a B.A. from the College of Islamic Disciplines (Usul ad-Din) at the Islamic University of Madinah in 1979. At the University of Riyadh, College of Education he completed an M.A. in Islamic Theology in 1985 and in the department of Islamic Studies at the University of Wales, UK, he complted a Ph.D. in Islamic Theology in 1994. He taught Islamic Education and Arabic in private schools in Riyadh for over ten years.

Between 1992 and 1994, Dr. Bilal Philips established and lectured in the graduate and undergraduate Departments of Islamic Studies in the College of Education of Shariff Kabunsuan Islamic University in Cotabato City, Mindanao, Philippines. In 1994 he founded and directed the Islamic Information Center in Dubai, UAE and the Department of Foreign Languages at Dar al-Fatah Islamic Press in Sharjah, UAE. In 2001, Dr. Bilal Philips established the Islamic Online University; the first accredited Islamic University on the Internet. He was professor of Arabic and Islamic Studies at the American University in Dubai and Ajman University, head of the Department of Arabic and Islamic Studies at Preston University-Ajman, UAE, and a lecturer at Qatar Guest Center, Doha, Qatar.

He has translated the famous works Ibn Taymiyyah's Eassy on the Jinn, The Devil's Deception and Arabic Calligraphy in Manuscripts.

Amongst his authored works are:

(s) Usul at-Tafsir and A Commentary on Surah Al-Mulk